Bearing the title of ‘Aucklands first suburb’ is an honour Parnell takes seriously and the perfect place to explore Auckland heritage.

The area, situated on the fringe of Auckland CBD, has very few traces left of the original early Maori settlement and by 1841 the ‘Village of Parnell’ was for sale and the name of Parnell and the first suburb in New Zealand were established.

As a superb example of New Zealand heritage, Parnell still has many buildings with heritage status including Ewelme Cottage, Kinder House, St Stephens Chapel, St Mary’s Church and St John the Baptist Church as well as several other residential and commercial buildings, some of which are featured below.

Recent history of Parnell dates back to the 1960’s. Parnell narrowly escaped a high-rise-concrete fate when eccentric dreamer Les Harvey bought and restored a large area of dilapidated old houses and shops in Parnell which were converted into restaurants, cafes, craft shops and boutiques during the 1970s and today is known as Parnell Village. Parnell Road soon established a reputation for chic clothes shops, swanky restaurants and dealer art galleries that it retains today. The Winter Garden at the Auckland Domain is a treasure of great historic interest. It was designed in the early 1900s in the style of the famous English partnership of Edwin Lutyens and Gertrude Jeckyll and opened in 1913.

Rare and spectacular plants in an ever-changing display can be seen in each of the two barrel-vaulted Victorian style glass houses which face out on to an extensive court yard and sunken pool. The marble statues in the courtyard between the glass houses were added in the 1920s and 30s by local businessman William Elliot. One house is heated and shows off lush tropical and heat-loving plants while the other displays temperate plants changing with the seasons.

Substantial pergolas link the formal design and host many showy climbers. A wide collection of New Zealand ferns growing in a sunken scoria quarry to the rear completes the Winter Garden complex. Across the road is the Wintergarden Café, famous for high-teas. 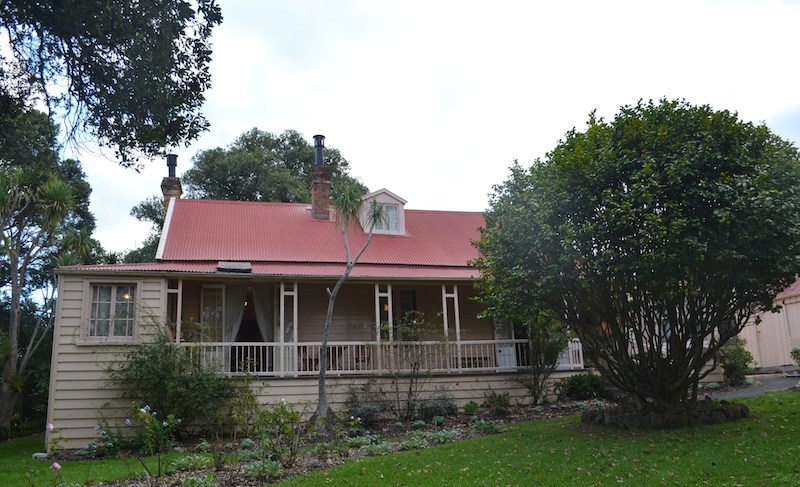 Visit Ewelme Cottage and really experience colonial Parnell. The cottage is a well-preserved early colonial dwelling, linked with the Anglican community in the Auckland region.
Originally constructed in 1863-1864, the timber house was commissioned by the Reverend Vicesimus Lush (1817-1882), when he was the vicar of nearby Howick.

This house museum is owned jointly by Auckland City and the Historic Places Trust. Located in a charming historic garden, Ewelme Cottage provides a venue for intimate wedding ceremonies, wedding photography, or for small cocktail parties and corporate functions. Hulme Court was built in 1843 for Sir Frederick Whitaker later to become Premier of New Zealand. It is in the Regency style and features a hipped roof, elegantly trellised verandahs and shuttered sash windows. The house has 300mm thick bluestone walls which have since been plastered over, and a slate roof. Its architect is unknown.

Despite some interior alterations over the years Hulme Court remains as one of the best examples of Regency architecture in New Zealand, and almost certainly the finest built in permanent materials.

The house has very great historical significance having been occupied by a distinguished group of early New Zealanders including: Bishop Selwyn; Colonel Hulme, Commander of British Troops in New Zealand after whom the house is named; Governor Gove Browne who used it as a temporary Government House; and, later, Sir Francis Dillon Bell, Minister of Native affairs and advisor to Governor Grey.

It is the second oldest surviving house in Auckland and the oldest documented dwelling still standing on its original site. Built in 1857, Kinder House is one of Auckland’s most notable stone buildings. It was commissioned by Bishop G.A. Selwyn and designed by Frederick Thatcher, the architect for many Anglican buildings in Auckland. The ground floor rooms are devoted to the display of watercolours, photographs and sketches by John Kinder (1819-1903). 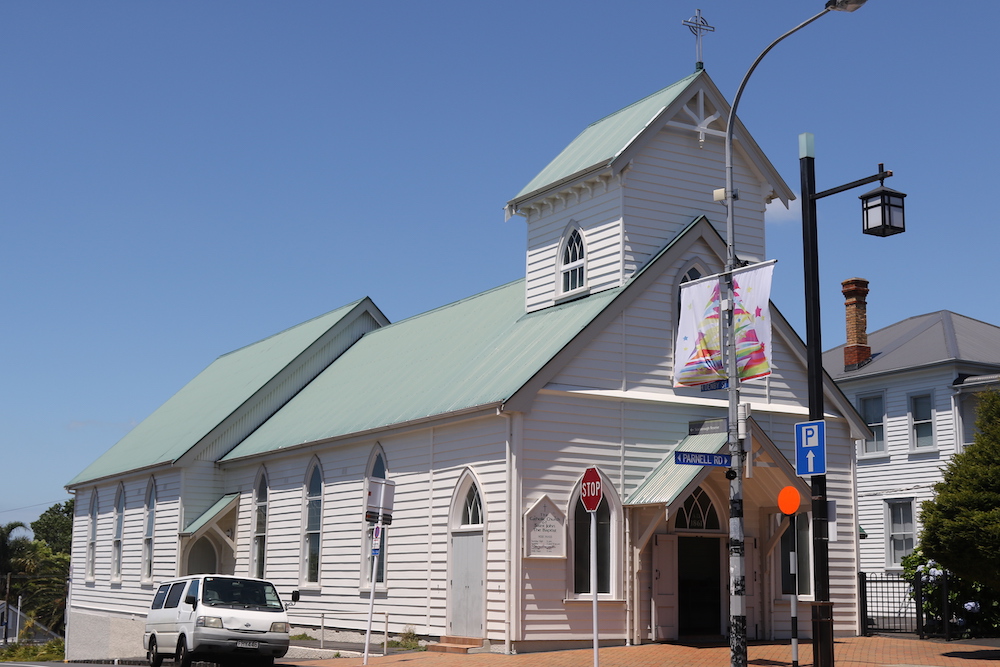 St John the Baptist, is in-fact the oldest surviving Catholic Church in the Auckland Diocese and one of the oldest in New Zealand. Being founded by the first Bishop of Auckland, Jean Baptiste Francois Pompallier, and formally instituted by his Lordship on Sunday 12th of May 1861. 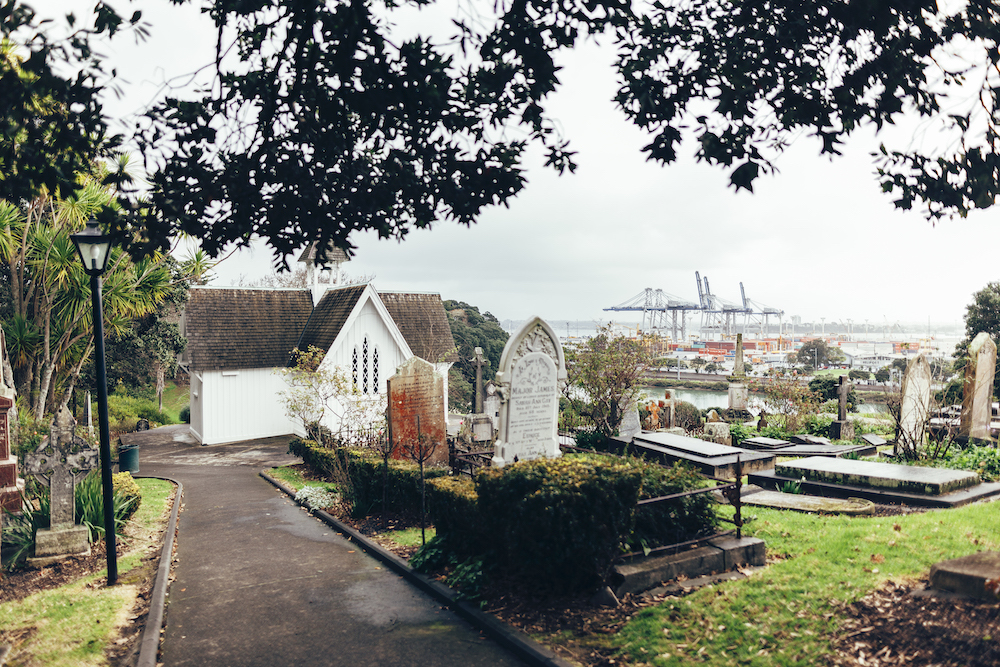 St Stephen’s Chapel replaced an earlier stone chapel built for Bishop Selwyn in 1844. The latter structure designed by Sampson Kempthorne had collapsed in July 1845, only seven months after its opening. The new chapel was designed by Frederick Thatcher and opened in early 1857. It is an aesthetically pleasing, well proportioned structure similar in general appearance to the other ‘Selwyn Churches’ of the time. The historical significance of St Stephen’s lies in the chapel’s association with this very important event in the history of the Church of England in New Zealand, its link with Bishop Selwyn and the fact that it occupies the site of one of the first churches built in New Zealand under his direction.

Website for more info on opening times and services.

A Brief History of Parnell

Parnell, contained between the harbour and the Domain, is Auckland’s oldest suburb. It is vibrant with history. Pukekawa is the Maori name for the Domain, in memory of the dead in ancient wars. There was a Maori Pa at Point Resolution, above the Parnell Baths. At the foot of Stanley Street, then waterfront at Mechanics Bay, was a Maori hostelry, canoe reserve and market, not demolished till the 1960s.

The purchase of land for Auckland was confirmed in 1841, and blocks of 3-5 acres were sold, quickly subdivided into 36 allotments and metamorphosed into the village of Parnell. But there were stately developments too: Judges Bay was named for Sir William Martin (our first chief justice) and Attorney General Swainson, and John Blackett’s house and grounds in St Georges Bay were “the finest in the province”. 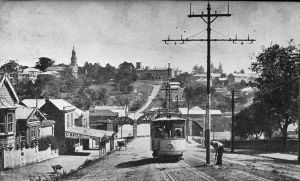 Bishop Selwyn decided early that Parnell was to be the focus of the Church of England in Auckland, and in 1842 he had chosen the site for its future cathedral. He established a deanery, St Barnabas Church (formerly above Mechanics Bay), St Stephen’s School (initially for Maori girls), the Church Grammar School in Ayr Steet, St Stephen’s Chapel in Judges Bay, the first St Mary’s church, and the Cathedral library and bell tower and Bishopscourt in St Stephens Avenue.

Most early settlers were mechanics and tradesmen. They congregated in Mechanics Bay, where the first European suburban and industrial development took place. Early industry included a sawmill, a brickworks, Robertson’s Rope Walk, a flour mill and boat building. From the 1870s, first Mechanics Bay and then St Georges Bay disappeared as they were reclaimed for industry, railway and port development.

In the early 1850s a bridge crossed the inlet to Mechanics Bay – right where Parnell Rise begins now – and this opened a main highway through Parnell and Newmarket to the farming settlements of Epsom, Onehunga and the south. In the 1870s a railway system saw a bridge over Parnell Road and a tunnel through Parnell Hill. Tramcars ran up Parnell Road in the early 1900s. In 1919 some of the finest foreshore houses were demolished and their land cut away to form Tamaki Drive, finally severing Parnell from contact with the open harbour.

For a time Parnell languished. Industry, office, transient accommodation encroached. But Les Harvey , a local property developer, created ‘Parnell Village’, catalyst for regeneration both as a tourist centre and a prime residential area. 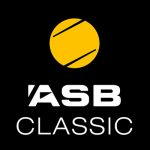 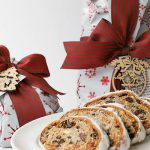