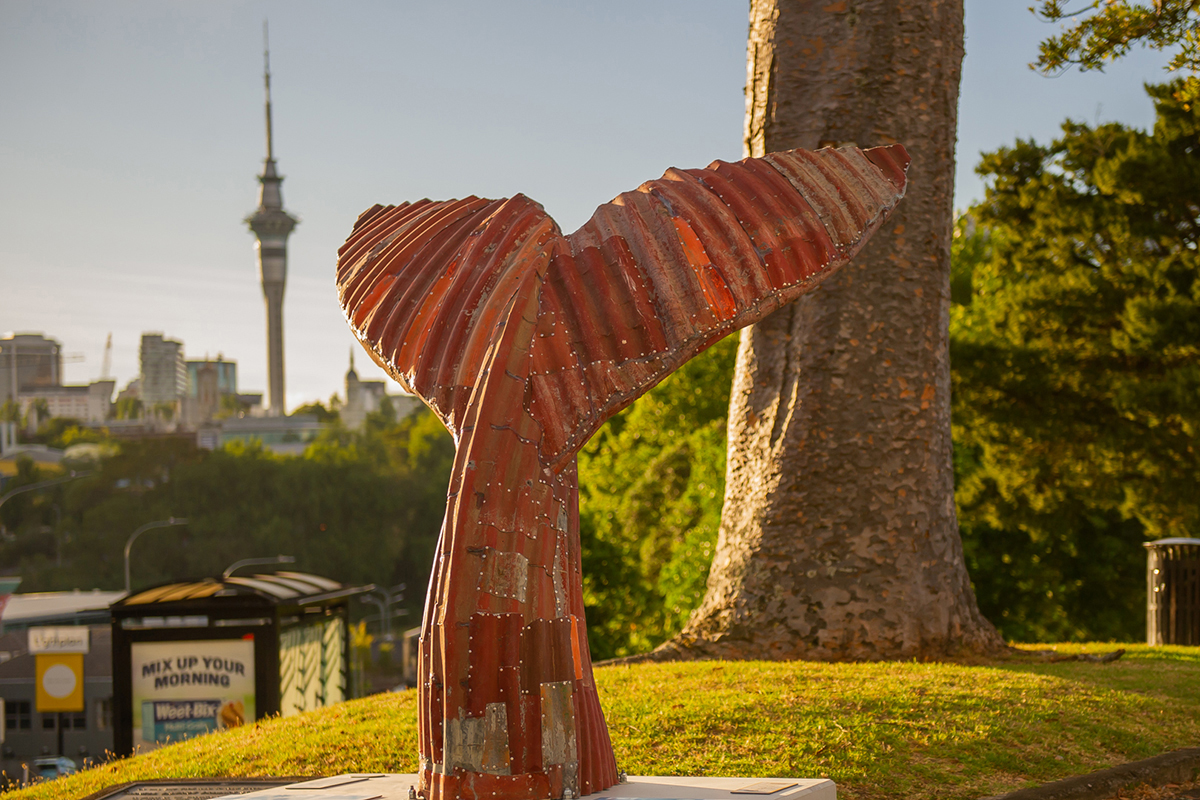 Jeff Thomson has taken the bold choice of creating his own tail from corrugated iron to be displayed at Fraser Park,

Jeff is rather like a modern day Abel Tasman or Captain Cook—he sails freely into unknown seas, making important discoveries en route. “Simply by working with a new material he has enlarged our world.”

Born in Auckland and growing up in Castor Bay on its North Shore, Jeff has become the corrugated iron man of Australasia. From an early age he showed considerable promise, developing an ability to draw images quickly with pencil rather than using the written word. This artistic flair was soon picked up and nurtured.

When he went to one of Auckland’s most adventurous secondary schools, with a strong “Education through Art” tradition, it was clear that the next step was the Elam School of Art attached to the University of Auckland. Here, Jeff was exposed to a series of horizon-expanding situations that culminated in a Bachelor of Fine Arts in 1981.

It was during 1980 that a profound change occurred in Jeff’s approach to life, art and environment. While walking the rural and urban miles he started observing and collecting the wealth of highway paraphernalia that he found on our roadsides. These highway experiences culminated in the rural letterbox sculptures, the first body of Jeff’s work to gain national recognition by a diverse range of New Zealanders. And it was through this letterbox series of works that Thomson came face to face with his chosen material – corrugated iron.

"I decided to make my own whale tail, rather than paint one of the standard shapes. Using second hand weathered and coloured corrugated iron, I’m using what other people have painted so it can still be considered a 3-dimensional painting.”

Today, corrugated iron animals, birds, cars and people have established Jeff  fairly and squarely in the memory banks of most New Zealanders and many Australians. Unlike other artists, Jeff has taken the bold choice of creating his own tail from scratch, rather than making his mark on one of the pre made sculptures.

“I decided to make my own whale tail, rather than paint one of the standard shapes. Using second hand weathered and coloured corrugated iron, I’m using what other people have painted so it can still be considered a 3-dimensional painting.”

Stuart Carlyon is a professional practice offering financial planning services to assist clients in achieving their lifetime goals. They are good stewards of their clients’ finances, and they gladly support WWF-NZ who are good stewards supporting marine conservation in the Hauraki Gulf.